Shine Hotels is a hotel with views of the Alhambra located in the Albayzin, one of the most emblematic and popular neighborhoods of Granada. There are many people who come here eager to know the Alhambra and the various tourist monuments of the city. Of course there are also places in the province of Granada that are well worth a visit.

This is the case of Guadix, just 55 kilometers away from the capital of Granada and where you can see something unique in Spain: The neighborhood of cave houses.

What is special about it? The neighborhood of houses-cave, is one of the biggest attractions of Guadix. This neighborhood of cave-houses, better known as the troglodyte neighborhood of Santiago, has more than 2,000 accommodations of this type, where entire families live. The best place to see them is the Torrecilla, which rises above the neighborhood; It is a place where mines of silver, copper and iron exploded, already 2000 years ago.

In addition, Guadix also offers other attractions such as the Alcazaba and the Cathedral. The Alcazaba, originally from the Caliphate era, was declared a National Monument. The Cathedral was built on the main mosque in the 16th century; It deserves a lot a visit.

Undoubtedly, a 100% recommended visit from Granada since the attractiveness of the area is very great, and, in addition, it is a unique opportunity to know in first person a little more about the history of this province.

If you do not want to miss anything of this wonderful city and province and you are looking for a hotel with views of the Alhambra, come to Shine Hotels. You can contact us through this form; we will respond shortly. The hotel is located in an old palace house of the XVI century located in Carrera del Darro, one of the most charming streets of the city. 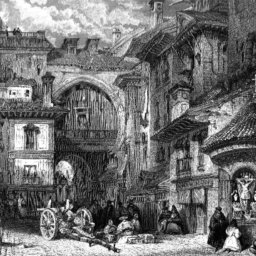 The Alhambra will restore the Bibrambla door.

Alhambra is the most visited monument in Spain; a true jewel with an incalculable cultural and historical value. In Shine…